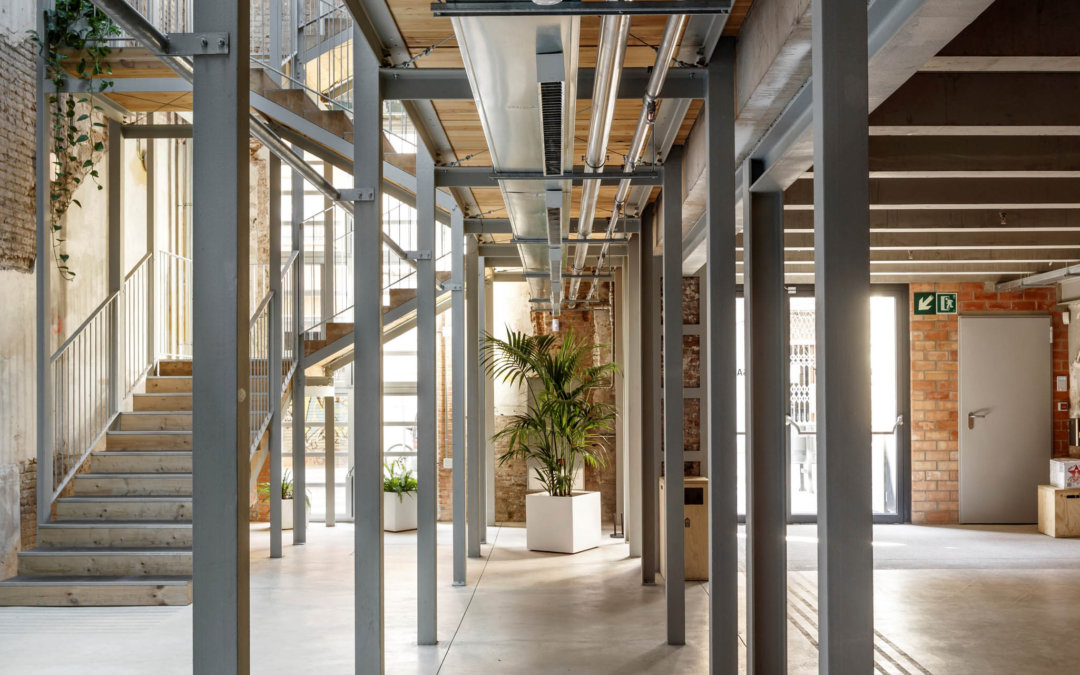 Lleialtat Santsenca was a workers’ cooperative founded in the late 19th century, created by residents of the Barcelona neighborhood of Sants as a response to the abuses of business classes in the area. The goal was to provide food at a cheaper price, for the benefit of all its members. Over time, the cooperative was able to build its own building, a design by Josep Alemany and Juvé, the architect of the facade of the Molino in Poble Sec (1929). After the civil war, the building was expropriated and the cooperative reopened in 1941. In 1950 it closed and accommodated sveral uses over the years: sweet factory, Bahía party room, etc. After falling into decline local groups got together to save this emblematic building. Finally, through a process of citizen participation, the project by H Arquitectes was chosen. The following description was provided by them.

The project addressed three separate bases: understanding the historic value of Lleialtat Santsenca (1928), a former working class cooperative located in the Sants neighbourhood; assessing in detail the building’s physical state in order to retain as much as possible; and to take maximum advantage of the collaborative process commenced in 2009 by neighbourhood organisations to find a new use for the building.

To that end four simple objectives were established: first, to take advantage of everything that could be salvaged from the original building; second, defining a refurbishment strategy by identifying the essential interventions, both conservation related and others, facilitating the optimum use and potential uses of all those spaces; third, to set out an ‘imersive dialogue’, strained even, if necessary with the existing builidng; and fourth, to develop a sustainable approach equally for the existing as well as the new interventions.

The building consists of three structural bodies: the main one, facing C/ Olzinelles and C/ Altafulla, accommodating the two main spaces (an old shop on the ground floor and the hall on the first floor); the middle one, with access from C/ Altafulla; and the interior volume, which is not accessible from the street, configuered in an L-shaped layout. The precarious nature of the structure, besides being poorly inter-connected, suggested a large longitudinal void configuration, joining the three volumes and all their spaces (new and old) via a gradual progression, from the public to the more private areas. The void came about with the complete demolision of the partywall to C/ Olzinelles, allowing it to become a sort of interior street, accommodated within the second structural volume by enlarging the existing light well. The final intervention involved creating a triple height space connected to the void of the two previous volumes. The succession of voids configures an atrium defined by ‘new’ facades opposite the existing party walls, which show traces of the building’s previous existance. The atrium introduces light and air to all the spaces, becoming the axis of the horizontal and vertical circulations, and offering new potential use for unforeseen uses.

The existing roofs were assessed as not being structurally sound, so only the trusses in the main hall were retained. A new roof was constructed above the whole building, linked volumetrically to the three structural bodies: three gable roofs, with polycarbonate panels to the south and insulated metal sheeting to the north, above a new metal structure, bringing light and air to the atrium, with windows in the highest corners to facilitate natural convection.

Inspired by Brazilian architect Lina Bo Bardi’s Teatro Oficina in Sao Paolo, the Atrium is an intermediate naturally air-conditioned space that organises all the internal circulation through a series of footbridges and stairs that evoke the image of the scaffolding on a construction site. The building functions thermally through passive strategies based on inertia and insulation; three lightweight roofs permit natural lighting and favour adequate ventilation.

By increasing the area of the roofs greater solar gain can be achieved: in winter heat is collected thanks to a heat recovery system for the interior spaces; in the summer, the heated air in the top part of the atrium forces a convection style movement of air which releases the hot air through ridge openings in the roof, controlled by automatic sensors.

In winter these air-conditioned spaces expell warm air warming the Atrium; for the third body a ventilated chamber with a sun filter optimises solar gain in winter and summer thanks to the capture of solar gain.