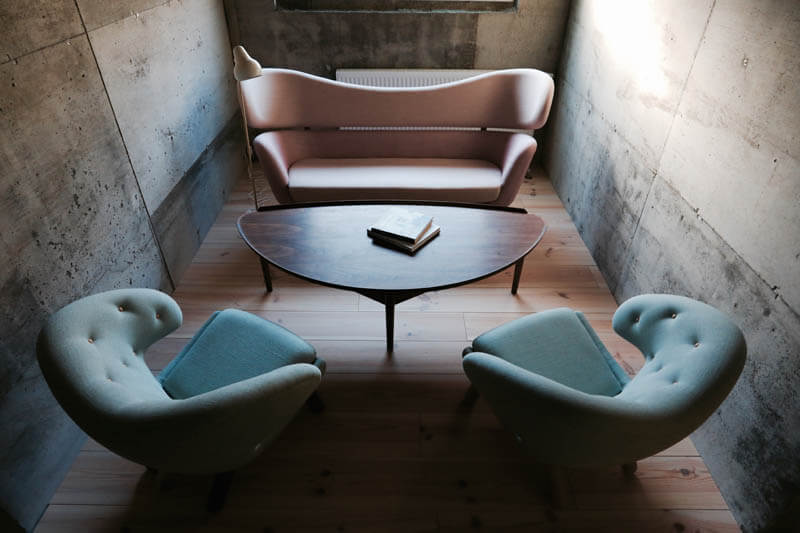 Currently on display at Minim, the design showroom located on Via Augusta Barcelona, is a selection of furniture from the Danish furniture designer Finn Juhl (Copenhagen 1912) that includes a selection of the chairs, tables, cabinets and sofas that he created over his long career. All the pieces are produced by Onecollection a company that was entrusted by Juhl’s widow to reproduce the various furniture elements exclusively since the year 2000. Based in Ringkøbing on the west coast of Denmark, the company currently produces 40 separate pieces designed by Juhl.

Juhl’s work represents the epitome of mid 20th Century Scandinavian design, modern, timeless, well crafted and effortlessly versatile. Juhl trained as an architect but his passion was design and many of the pieces he produced were for his own personal use; during the 1950s he collaborated with Baker, a US manufacture, and enjoyed his first commercial success. Juhl died in 1989, today his original pieces sell as auction for astronomical sums and are coveted by design aficionados around the globe.

Finn Juhl did not name his designs, so many of the works are simply described by their functional use together with the year they were produced.

The most emblematic as well as being one of the first pieces he created was the Pelican chair, which even today seems ground breaking and inviting. Inspired by the different ways in which the human body inhabits a chair, the design is curved and enclosing with a wide base that ‘hugs’ the human form. Another highlight is the Sideboard 55, designed in 1955 with its timber carcass and sliding doors and drawers expressed in a colour scheme. One of his first designs was the 45 Chair, one of the first armchairs to separate the upholstered areas from the timber structure. Originally handmade, the chair was later mass produced.

Finn Juhl appreciated art in all its expressions, the Chieftain Chair (1949) expresses a synthesis of modern art and African tribal art and is made using sophisticated joinery. It represented a departure from the purely functional approach of Danish design  The Poet Sofa, designed in 1941, is one of the pieces Finn Juhl designed for his own home; its slim upholstery and intimate seating arrangement makes it as relevant today (when most apartments tend to be small) as it was back then.

MINIM is a space dedicated to the display and sale of contemporary furniture design in Barcelona where a large selection of top international and national brands, remarkable for their formal and aesthetic quality. Firms that are known the world over and have been selected for their quality, design and innovation. Among them is the Danish company Onecollection, of which MINIM is an exclusive distributor for all of Catalonia.