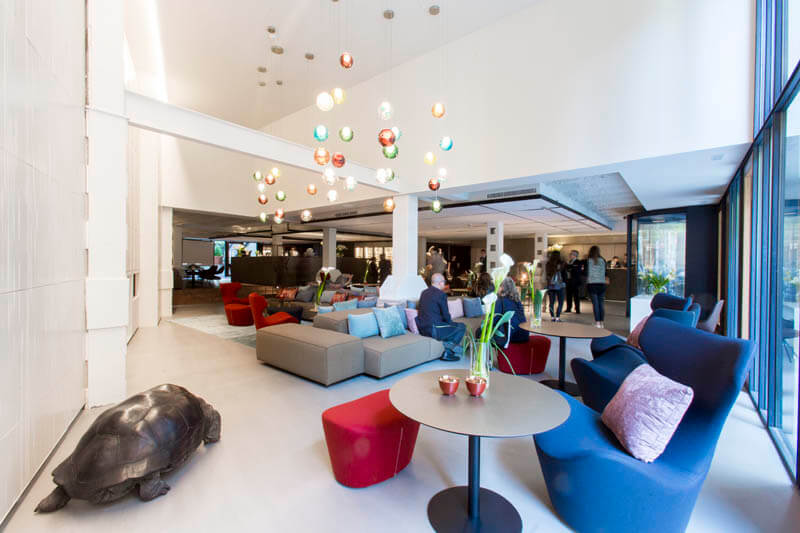 Sometimes it seems like a new hotel opens every week in Barcelona, despite the controversial moratorium on new hotel licences in Barcelona city centre there can be no doubting that the investment and the jobs that a new construction involve can be beneficial to the city.  That is the case in point with Ohla Eixample, a new hotel from the renowned Ohla group located as the name suggests at the heart of Barcelona’s most elegant neighbourhood, the Eixample, on Corsega 289 just off Rambla Catalunya.

With an overall capacity of 94 rooms the hotel boasts a new gastronomic restaurant, Xerta which will be manager by the López family (Les Terres de L’Ebre); three multi-use halls for conferences and meetings; an interior courtyard as well as a rooftop terrace with views over the Eixample esquerra. One of its features is a heated infinity pool at the uppermost level of the terrace. The design language is cutting edge yet functional incorporating new technologies with a new facade inspired by music and ceramics. 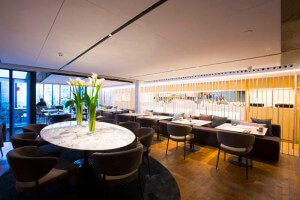 The problematic original facade with its de-contextualised curtain wall of glass dating from the 70s was resolved by the architect using vertical modules of different proportions that somewhat hide the number of floors and includes 5 cantilevered ‘boxes’ of wood over the street.

The facade utilises ceramic tiles to achieve a new expression, chosen by Isern as a typical Mediterranean material, its textures, light reflections and colour gradations create an environment that protect the guest from the exterior. The finish for the ceramic tile was selected based on a criteria of infinite combinations so that the composition would be completely flexible but also appear as if it were a large scale mural.

To achieve this the project architect worked with the ceramist Toni Cumella who was ably helped by the Institut d’Arquitectura Avançada de Catalunya using applied robotics manufacturing process for the ceramic tiles. Its texture is achieved by an algorithm that transforms recorded music into drawings made by a robot while each piece is being manufactured. Each tile features eight seconds worth of soundtrack, which was recomposed by Max Richter and is a variation of Vivaldi’s Four Seasons. The result is that each piece is different and they all fit as if it were a great puzzle. The 800 pieces of the facade and 320 pieces that make up the entrance of the Eixample Ohla translate music in forms of grooves, which become more or less deep depending on the intensity of the music. This artist’s concept is a tribute and a recognition of the local importance of ceramics in Barcelona, and currently exported to many cities and buildings in the world. 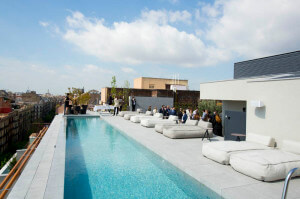 In terms of the interior deign the hotel is characterised by geometric lines and quality materials such as wood, leather, iron and polished cement. This approach helps to integrate the aesthetic of the new iteration with the previous one and represents an overall continuity within the urban setting.