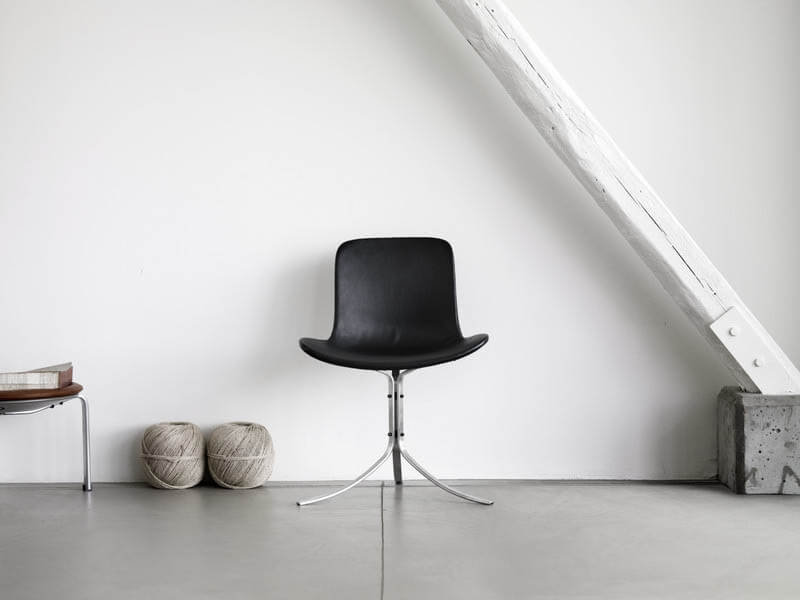 Barcelona Design Week (June 2nd through June 12th 2016) is the perfect opportunity to discover new talents and re-evaluate the classic designers who are sometimes not so well known in countries other than their own. Mid 20th Century Scandinavian design has provided the world with some iconic furniture and one of its key proponents was Poul Kjærholm (Born in Øster Vrå, Denmark in 1929) a trained carpenter and cabinet maker who studied at the Danish School of Arts and Crafts until 1952 and later established his own studio. The renowned contemporary furniture showroom and interior design studio En Linea Barcelona is currently hosting an exhibition dedicated to Poul Kjærholm at the spectacular space on Córsega 284, going on till June 18th.

Kjærholm had a particular interest in different construction materials; especially steel which he considered a natural material with the same artistic fineness and possibilities as other natural materials. Poul Kjærholm was closely associated with the Danish furniture maker Fritz Hansen where he designed a number of noteworthy chair prototypes. In 1955 Poul Kjærholm initiated his collaboration with manufacturer Ejvind Kold Christensen, which lasted until Poul Kjærholm’s death in 1980. Since 2003 Fritz Hansen holds the exclusive licence to produce “The Kjærholm Collection” defined by their logic and attention to detailed.

His designs are on permanent exhibition at the Museum of Modern Art of New York (MoMa) and the Victoria and Albert Museum London as well as other prestigious design museums in Denmark, Norway, Sweden and Germany.